Submit this as a PDF on iCollege. You can use whatever you want to make your drawings, including Gravit Designer, Adobe Illustrator, Excel, PowerPoint, Microsoft Paint, or photographed/scanned pen and paper. I highly recommend using Desmos too!

Cite your sources and show your work.

Imagine a mild-mannered professor named Chidi Anagonye who is crippled with decision anxiety. He has to choose the best combination of pizza and frozen yogurt, but doesn’t know what to do! Here’s the information he has:

Draw Chidi’s budget line (or his personal consumption possibility frontier) and figure out the equation for this line in \(y = mx + b\) form. What is the equation?

What do these lines each represent?

This utility function looks a little different from ones we’ve seen previously in class, since \(x\) and \(y\) no longer have the same numbers in front of them. What does this imply about Chidi’s preferences, and why? Choose A, B, C, or D and explain in ≈30 words:

Set the slope-only MRS and the ratio of prices equal to each other and solve for \(y\) (i.e. make the equation start with \(y =\)). This is the price-attuned marginal rate of substitution.

How many slices of pizza and bowls of frozen yogurt will Chidi consume given his budget of $45? How many utils will that level of consumption provide him with? Plot the budget line and tangential indifference curve.

Leslie Knope, deputy director of the parks department, once mused “Why would anybody ever eat anything besides breakfast food?” Consistent with this belief, she consumes waffles whenever possible. 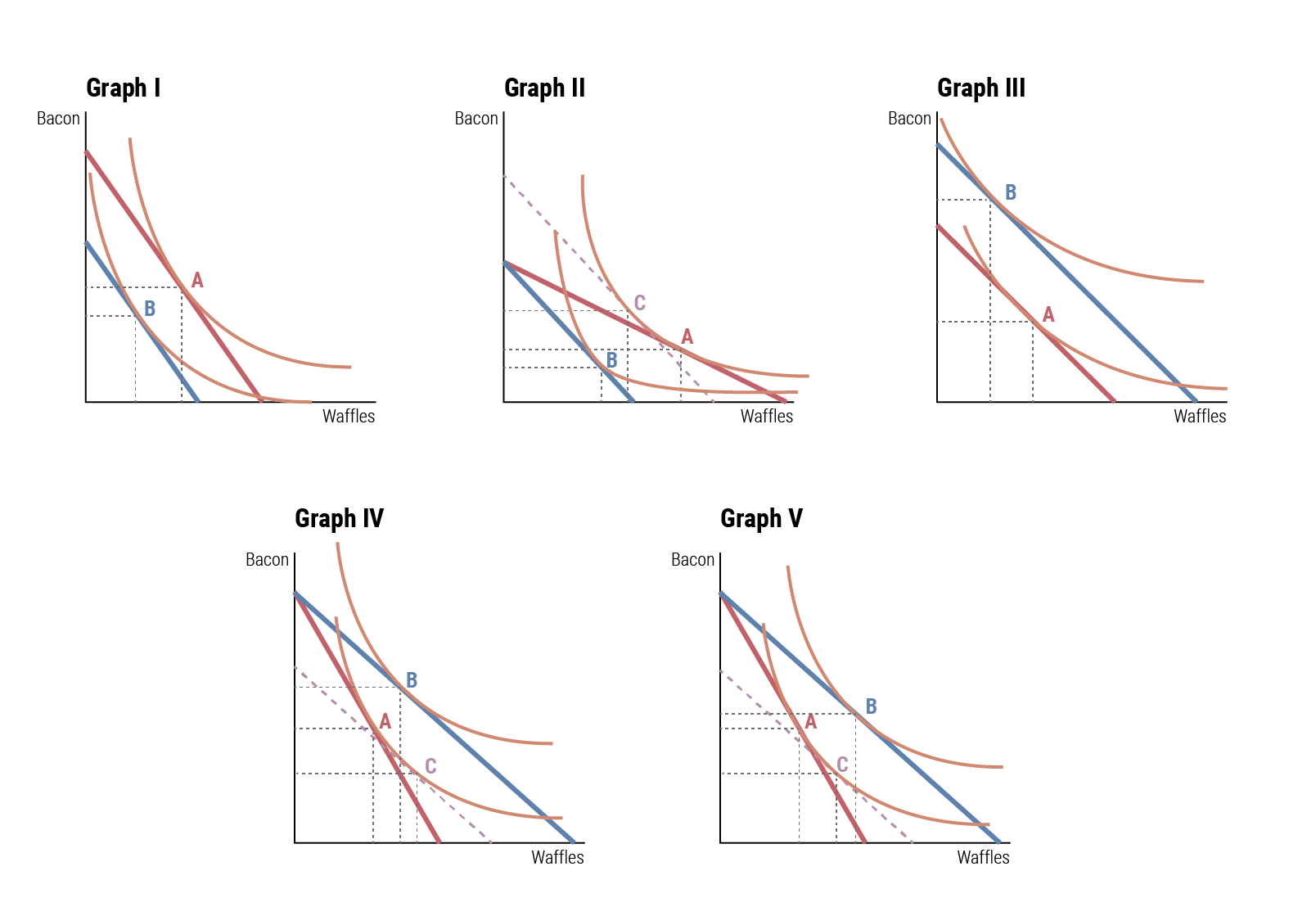 For each of these questions, select the appropriate answer(s) and explain why in ≈20 words.

Suppose residents of a rural community in a developing nation spend all of their income on two goods: clothing and food. The price of clothing is 10 dinar per package and the price of food is 5 dinar per kilogram.

Consider a family with income of 200 dinar per week. In the absence of any government program, the family would consume 30 kg of food.

In each of these situations, explain who is the principal, who is the agent, and what aspects of their interaction are of interest to each and are not covered by a complete contract.

For each of these situations, predict a few possible consequences if the contract is poorly defined. Answer both in ≈100 words.

The British Road Safety Act of 1967 created a mandatory penalty for drunken driving—those convicted of a DUI lost their licenses for one year. Several insurance companies began offering policies that insured against loss of license. Policyholders were guaranteed a chauffeur-driven vehicle if they were convicted of DUI.

It is reasonable to predict that people who chose to buy this insurance would subsequently have a higher rate of DUI arrests than those who did not buy the insurance.

Think of two public or nonprofit sector jobs. In each case, describe why the employment contract is necessarily incomplete. What important parts of the person’s job—things that the employer would like to see the employee do or not do—cannot be covered in a contract, or if they are, cannot be enforced? Discuss in ≈75 words.

In an effort to encourage parents to read to their children, suppose that the state created “Georgia Reads,” a new program that subsidizes the purchase of children’s books. Under this proposal, every time a children’s book is purchased from a store in Georgia, the store would charge just half of the retail price and would be reimbursed directly by the state for the other half. The market price for a children’s book is $10 and books are a normal good.

(This question is tricky, but it’s very similar to the Harvest Box example that we will talk about in class. If you find yourself completely stuck, don’t worry—this is a stretch/extra-credit question.)

Legislators are frequently frustrated by a common reaction to new policy. Lawmakers pass a new bill that provides grants to local jurisdictions for specific purposes, but most of the money never seems to be spent for what they had hoped it would. This is rarely because local officials break the law—most are careful not to violate the letter of the law.

For instance, imagine that Georgia wanted to increase the amount of money local school districts spend on textbooks. Legislators enact the Textbook Act of 2020, which provides grants to local districts equal to $14 per student (so a district with 1,000 students would get $14,000). This new money can only be spent on textbooks. At the end of the year, state officials discover that the average amount spent on textbooks in the state only increased by $3.